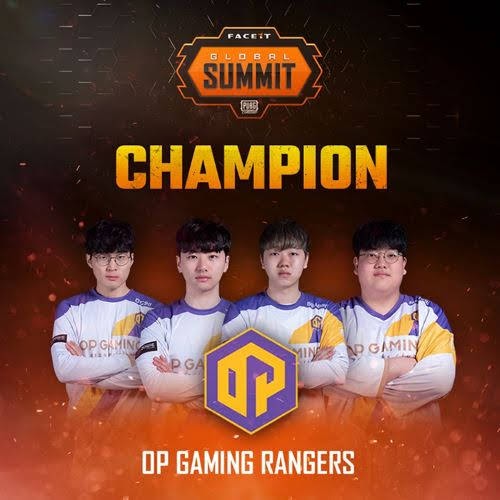 PUBG announced the first global sporting event of the 2019 season, the FACEIT Global Summit: PUBG Classic (FGS), ended on April 21st(local time). The OP Gaming Rangers won a total of 101 points in a total of 58 kills in the two days of the Grand Final.

FGS held at ICC Auditorium(ExCeL London), UK from April 16th to 21st, attended Battleground e-sports players and fans from all over the world. In addition, the matches of this tournament were relayed in real time through the online live broadcasting platform of each country including Afreeca TV.

Twenty-four teams from North America, Europe, China, and South Korea competed for $ 400,000 in prize money, and the honor of the FGS ranked first in OP Gaming Rangers (58 kills, 101 points). The OP Gaming Rangers won two of the Grand Final 12 matches and scored high. He showed the skills of the 2019 PUBG KOREA LEAGUE (PKL) phase 1 championship, overcoming the teams that have scored just a few points, including VSG and Team Liquid (TL).

In the top two, the STK team in North America and the TL team in Europe topped the list. The first and third teams with excellent results at FGS will receive a prize pool, and the team’s area will receive additional slots at the 2019 PUBG Global Championship (PGC) held later this year. The additional slots were acquired through FGS in three regions: Korea, North America, and Europe.

In addition, the OGN ENTUS Force ranked fourth with 52 kills and 86 points. Team VSG finished fifth with 50 points, 84 points and Afreeca Freecs with 34 points and 13 points with 51 points.