Gwangju Mayor Lee Yong-seop, chairperson of the organizing committee of the swimming competition, said, “The high interest and enthusiasm poured 75 days before the start of the tournament will be the energy that will lead the swimming tournament to success. Gwangju citizens and the whole nation are one, I will make a competition that will be one of the world. ”

On this day, Cherry Bullet, NATURE, THE BOYZ, IZ * ONE, TXT, N.Flying, MOMOLAND, Hong Jin-young, TWICE and BTS appeared in the concert.

After sun set, the audience brightened up the stadium with LED support rods and continued to cheer up.

In this concert, Korea Tourism Organization(KTO) invited about 10,000 foreign fans to Gwangju, and the cast members greeted the fans around the world in English, Japanese, Chinese and Spanish. 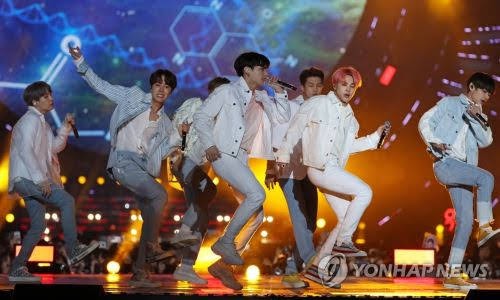 The last stage of the day was decorated by BTS. BTS showed four stages of 21 minutes including ‘BOY with Luv’, ‘DNA’, ‘Make it Right’ and ‘IDOL’. J-Hope, a member of Gwangju, introduced himself as “I am a Jeollanam-do Gwangju Baby”.

FINA World Championships Gwangju 2019 will be held from July 12th to August 11th with a professional championship for 31 days and a Masters tournament with clubs and more than 15,000 athletes and officials from 200 countries will participate.

Group NU’EST Comes Back on April 29

ASTRO debuted in Japan with the First Japan Mini Album