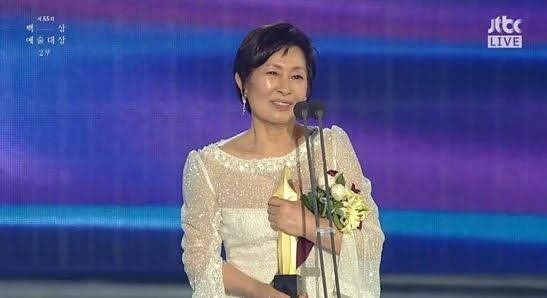 On May 1st and 2nd, Baeksang Arts Awards ceremony held at the Samsung-dong COEX. Kim Hye-ja received a grand prize in the TV drama category as JTBC ‘s “Dazzling” and Jung Woo-sung received it in the Film category as “Innocent Witness”.

Kim Hye-ja said, “My life is sometimes unhappy and sometimes happy. Someone said life is only a dream, but I was happy that I was alive. You, living hard life now. You deserve everything on every moment by you was born. Life is worth living even if you live a not so great days. Do not ruin the present by a past filled with regrets and an uncertain future. Live today, Dazzling. You deserve to do it.” from the last episode script.

Baeksang Arts Grand Prize is a comprehensive art awards ceremony that was held in 1964 for the promotion of stage art and video art. This year, JTBC PLUS daily sports was hosted and it was broadcast live on JTBC. Progress was made by comedian Shin Dong-yeop, actor and singer Suzy, actor Park Bo-gum.

SBS weekend TV drama ‘The Fiery Priest’ was ranked No.1 in...

Korean stars donate to the victims of the Gangwon province forest...